Mountaineering in the Sierra Nevada 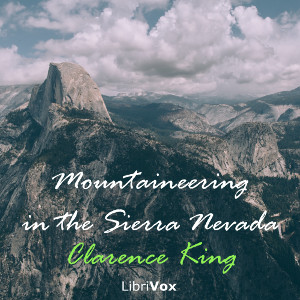 Mountaineering in the Sierra Nevada

LibriVox recording of Mountaineering in the Sierra Nevada by Clarence King.

"Mountaineering in the Sierra Nevada" is a memoir by Clarence King of his adventures and work with the California Geological Survey. King later led a major survey along the 40th Parallel in the American West and then was appointed the first director of the new U.S. Geological Survey.

King's 1872 "Mountaineering in the Sierra Nevada" exhibits a modern sense of timing and insight, and his accounts of hand-and-foot rock climbing seem as fresh as last week's blog post. He was part of the Victorian wave of mountain-climbing that first scaled the highest world peaks in the mid-19th century and, as a scientist, was part of a similar wave of new theories and discoveries: Darwinian evolution, glaciers, volcanism, erosion, earthquakes, topographical techniques, and human ecology. California had just passed through the Gold Rush years, and further survey of the Sierra Nevada was desired to extend knowledge of California economic geography.

While listening to this historic book, please consult a supplemental web resource at http://melanie.mccalmont.org which provides 19th century references, photographs of Clarence King and the Sierras, geologic definitions, and links.

The book is arranged in 14 chapters, each with a distinct purpose. Chapter 1 'The Range' starts slowly as a geologic history and description of the Sierra Nevada, then switches midway to an adventure across the desert. Chapter 2 'The Forest' likewise starts at a slower pace as King describes in detail the pine and sequoia forest through which the corps of discovery moves, then switches to a human interest story of the Maidu Indians. Chapters 3, 4, 11, 12, and 13 are mountaineering stories at their finest, from a time when technical gear consisted of ropes and hob-nailed shoes only. Chapters 7 and 8 describes King's participation in the boundary survey of the new Yosemite National Park. Chapters 5, 6, 9, 10, and 14 are centered on human interest stories in the Sierra Nevada. (Melanie Schleeter McCalmont)

Uploaded by librivoxbooks on August 18, 2017